When the press office of chancellory announced that Angela Merkel would attend the 25th anniversary ceremonies of Solingen massacre, the decision was hailed by the Turkish-German community. A couple of days before the ceremony, German president Frank Walter Steinmeier had also hosted the surviving family members of the vicious attack. It seemed like the upper end of German state was finally showing some strong signs to pull back up from Neo-Nazi quagmire.

During the ceremony in Dusseldorf, Angela Merkel made her much anticipated speech right before Mevlude Genc who lost her two daughters, two grand daughters and a niece in the attack. Although Merkel’s speech included some honest confessions, it fell one word short from becoming an epic one.

In 2017, German state started holding statistics on Islamophobic attacks for the first time in its history. At the en of that year, the official numbers suggested the total of Islamophobic attacks neared One Thousand. However, almost all the Turkish experts, NGOs agreed on one thing: the real number is much higher as most Islamophobic attacks go unreported. According to some experts, the actual number could be twice as much. And 2018 started out worse than the previous year. In the first quarter, more than 300 hundred anti-Islam attacks took place, some of them included throwing molotov bombs into the mosques. So the Islamophobia situation has been pretty dire in Germany.

When Angela Merkel took the stage at the overcrowded press center of the North Rhine Westphalia chancellory building, she said she attributes the ceremony to victims of all hate crimes. However, German Chancellor never mentioned Islamophobia during her speech while referring to racism, xenophobia and anti-semitism many times.

Angela Merkel speaking at the ceremony of Solingen Massacre

Angela Merkel made some sincere confessions as well during her speech. At one point, she acknowledged that mistakes were made during terrorist NSU murders. “I can only apologize for the mistakes and negligence done by authorized institutions,” Merkel said. The German Prime Minister said racism is not only in our past, It still persists today and it is a disgrace on Germany. Merkel reiterated that every single person living in Germany should feel safe regardless of their background. But, two days before, near her chancellory office, another mosque was subjected to an Islamophobic attack, culprits of which remains at large as the rest of the attacks took place this year. 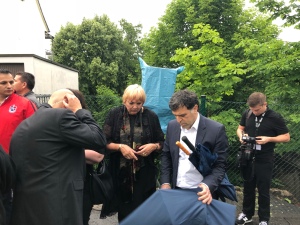 Green Party politician and Bundestag vice chair Claudia Roth attended the part of the ceremony at the arson site. As more people arrived at the site, more mumbling could be heard about her presence there. “We know what she has done in Turkey during Gezi riots, she cant just be as if nothing happen she should go,” shouted one man while another woman warned the crowd about it was not being the appropriate place for such argument. Let just stand on the left side yelled one man, pointing at the opposite of where Roth was standing. “Let just stand on the other side and isolate her,” the man continued. The it was all quite down when Mevlude Genc arrived at the scene.

View all posts by Admin