On September 9th 2000, Enver Simsek opened one of his flower shops on the outskirts of Nuremberg sitting in for one of his workers on vacation. It was still early in the morning so as a practicing Muslim, Simsek took a short break to perform the morning prayer. That is when two males entered his shop and shot him on the head and torso several times. Simsek would die from his injuries two days after the attack. He left behind one son one daughter and a wife. It was the first murder of what would be known 11 years later as a Neo-Nazi terror group Nationalist Socialist Underground or NSU.

Simsek’s family and the whole Turkish community had been held as suspects by the German authorities for 11 years despite obvious evidences of racist motives which were overlooked by the German police. Between 2000 and 2006, NSU would murder 9 more people 8 of whom were Turkish. The murders were carried out by the same Ceska 83 pistol. The German terror group carried out a bomb attack on Keup Street of Cologne which was almost exclusively occupied by Turkish-German community in 2004. It was in 2011 when German public learned about the existence of a far right German terror group NSU not because of police investigation but self incrimination of the group.

Enver Simsek and his family traveling to Turkey before the murder

The trial of NSU started in 2011 and the verdict is expected next week. Through out the trial, there have been many incidents where the prosecution and the state actively blocked every single lead that would prove the state involvement in the Neo-Nazi terror scene. That was contrary to what German Chancellor Angela Merkel promised in 2011. Lawyers of the relatives of the victims says what happened during the 5 year long trial is the opposite of what Merkel had pledged.

“It does not matter if Zschape gets a life time imprisonment. It does not matter if she spends rest of her life behind bars. As long as the true extend NSU and the state involvement within the group is not uncovered, the justice wont be served,” said 30 years old Abdulkerim, the son of first victim of NSU, Enver Simsek. All the relatives of the 10 victims feel the same. 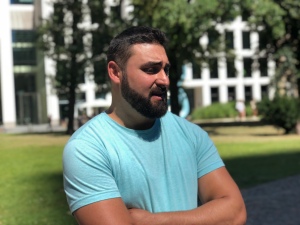 Beate Zschape has been on trial for NSU murders as the only surviving member of the terror group. According to German law, a terror group could consist of at least three people. And Munich High Court where the trial is taking place considered that NSU was founded by just three people. Lawyers of the defendants all say that it is virtually impossible for three people to carry out all the murders, bombing and the bank robberies as the planing and financing would require a grater resources.

Abdulkerim Simsek just had his 13th birthday few days before his father was murdered. He remembers what his family had to face when police deliberately accused his mother of the murder for years. “Police never considered that the murders could be carried out by a German right wing groups. We were held suspects by the police for 11 years. Losing my father was already hard enough and being held as the suspect of your own husband made our lives unbearable,” said the 30 year old

Enver Simsek left behind a big flower distribution chain with stores in several cities. As his kids were too young and his wife was not capable of running the business, the family lost the business following the financial pressure of the state. “After my father was murder, state institutions put an immense pressure on us. All of the sudden, my father’s business owed so much money to the state and my mother could not manage it and had to close down,” said Abdulkerim who went on to study medical engineering later on.

The five year long trial turned a huge disappointment for the relatives of the victims just as was the police investigations between 2000-2011. Abdulkerim fears that the whole NSU case and its ties to the state will be buried by sentencing Beate Zschape. And that could only encourage other far right groups to carry out more attacks in the future. “But I am here. I am German as much as I am Turkish. This is my country too and I am not going anywhere,” said Abdulkerim.

View all posts by Admin